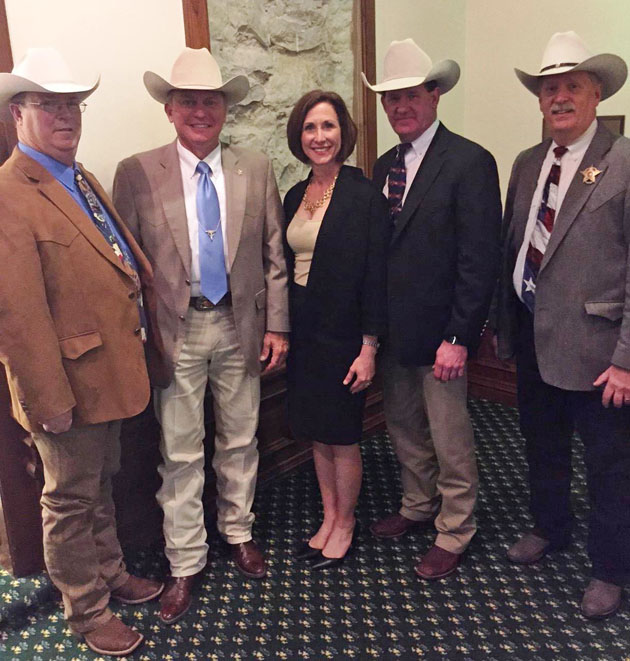 More than 120 sheriffs and other law enforcement officers from around the state that visited the 84th Legislature on Wednesday. The sheriffs traveled from near and far in an effort to express their interest in what legislative actions are taken, show their support of lawmakers and exhibit a strong unity among the sheriffs of Texas.

The Legislative Committee and staff of the Sheriffs' Association of Texas coordinated this special event to facilitate the sheriffs' involvement in the legislative process. Resolutions were passed in both the House and Senate recognizing the sheriffs and SAT. Sheriffs spent the remainder of the day meeting with their individual senators and representatives to discuss pending legislation and provide input on bills that affect the citizens of the state. The Sheriffs feel this contact is crucial to providing meaningful law enforcement in their counties.More

Advocates pushing for changes to Texas marijuana laws lobbied the state's leaders Wednesday. At the same time, some sheriffs are saying they don't want the changes coming to Texas. The push from marijuana advocates has SAT taking the opposite stance.

"We're drawing a hard line in the sand against it. We stand willing and able to testify at every opportunity to keep this from happening in the state of Texas," said Jackson County Sheriff A.J. Louderback, SAT president.More

More than 383 days have passed since the Sun family was found dead inside their home in the Cypress area of northwest Harris County. Harris County Sheriff Adrian Garcia has a message for the person or people who shot and killed the parents and two kids.

"I hope every time you blink, you see the images of these children," Garcia said. "I want you to remember that you killed two children. I want that to burn in your brain. I want you to have no peace in your life until you turn yourself in and confess."More

Much of what is known about the Texas Mexican Mafia comes from successful investigations led by local, state and federal law enforcement agencies. Each case provides a glimpse inside the dark and violent world of the gang and how they operate in the shadows. Two recent cases that are part of ongoing investigations highlight how the gang takes care of members who fall out of favor with the leadership. More

Interdiction for the Protection of Children
Federal Bureau of Investigation
The Texas Department of Public Safety has pioneered an innovative training course, Interdiction for the Protection of Children (IPC), to help troopers identify and rescue endangered children. The idea for IPC developed in 2007 during conversations between representatives from TXDPS' Education, Training and Research Division (ETR) and Texas Missing Persons Clearinghouse (TMPC) who envisioned the need for a new course to teach troopers how to observe suspicious behaviors associated with missing children and child abduction offenses.

While TXDPS troopers were well-trained and highly proficient in making observations of suspicious behaviors leading to arrests and successful interdictions of illicit drugs, weapons and currency, they lacked training and experience in working child victimization cases. More

Panic is a killer. Panic stops your smooth cycling of OODA Loops — the human decision-making process that we all complete repetitively each day. In a conflict situation, having your OODA Loop lock up means, at best, a lack of efficient action or, at worst, a fast loss. Watch, listen and learn about the importance of avoiding panic.More

Shoot or don't shoot: Police scenarios prove eye-opening for
civil rights leaders
Fox News
It was a split-second decision. A distressed man with a baby in tow was pacing back and forth in a manic state and shouting incoherently. The responding police officer calmly addressed the man in an attempt to calm him down and defuse the situation, but the man suddenly pulled an object from his side and lunged toward the officer.

Instinctively, the officer raised his Taser and squeezed the trigger. It turned out the man was armed with a knife, but the "officer," who was actually the firebrand African-American activist known as Quanell X, acknowledged he would have fired whether the assailant had a knife, a spoon or an empty hand.More